The Lies We Tell Ourselves

I wrote a joke a few years back:  “As much as I’m ashamed to admit this, I have Reverse Body Dysmorphic Disorder:   No matter how fat I am I can stand in front of a mirror, suck it in a bit and say, “Now THERE’S a prime physical specimen! Looking good, my man!  YOU are a catch!” 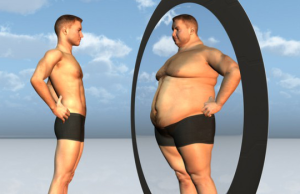 Maybe this is actually an issue?  Usually a thin person perceives themselves as fat, when everyone else (and every objective measure) sees them as thin.  Why would my inability to see (or admit) when I’ve gone well outside the “norm” for body weight be different?   There is some mental block allowing me to believe I’m still reasonably trim, even when my pants waist-size has increased four inches. I get by, and am not too bothered, even though the objective measures pile up.  What will it take to make me give up the lie and DO something?

I also had to confront this issue as the primordial, soul-consuming urge to write pushed its way back into my life again.  The sneering ass I host as a conscience says, “Well just fucking DO IT!”   Another year floats by.  He gets a little cockier, talking to some other entity in my head. “Watch this… we’re coming up on the annual ‘I really want to write’ whine.  Hey! You’re not writing, are you? Hello!”

Just Do It.  Nike may have hit upon the best marketing slogan in history.  Stop making excuses.  Do it.  So, aside from plopping myself in front of the keyboard and daily willing myself to add to this blog, and other projects, I asked myself “What stops me from “Just doing it.” I inventoried a lot of obstacles, outside myself, of course.  Work.  Exhaustion.  No help from others. (Oh,we’ll get into the patho-psychology of that some other time!)

Then, a timid voice in my head spoke up.  Like the slightly cowed “freedom fighter” in Monty Python’s Life of Brian, who responded when John Cleese’ character asks, “What have the Romans ever done for US?!””

I asked myself “What’s getting in the way of me from being the writer I want to be?” and that little freedom fighter sheepishly piped, “Uh… alcohol?”

“Who said that?!  Alcohol hasn’t ever prevented me from doing anything.”
“Well, there was that one time you had to cancel your Sunday activities to stay in bed until 5:00p.m. after a party.”

“Oh, right… but besides that.  What negative influence has alcohol had on my life?”
“Wha’bout that one near-deadly aspirated vomit story you have from college, eh,” a willing volunteer-apparition voice chimed in?

“Oh, Jesus… that was nearly 30 years ago.”
“Then what about the one from 3 years ago,” another queried?

“Well… yes. But I’ve been married 24 years BECAUSE of alcohol!  If I hadn’t been out getting trashed at the Avalanche in 1990, I would never have met my future wife — let alone had the courage to approach her, or the humor to hold her interest that night!”

The scene played on, and on, more tallies piled up, one embarrassing memory on top of the other, to a ridiculous crescendo not unlike the Python scene above:

“Okay then, aside from drinking since age 14, hiding whiskey in the ceiling panels of my room in the Seminary in Ireland, total loss of sexual inhibition on multiple occasions, blackouts in college, multiple “hilarious” vomit stories, near-miss drunk-driving stories, blood vessels breaking in my eyes and nose, long slow hangover recoveries, weight gain, and high triglycerides,  WHAT has alcohol ever done to me to prevent me from being a writer?”

Then I heard my own voice ask, “Which do you do virtually every day? Drink or write?”

I have learned through the years, and lectured both of my sons about the value of this lesson:  “Lying is bad, but the lies we tell ourselves are the most destructive of all.” 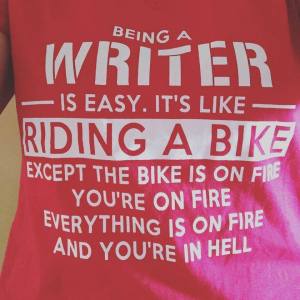 I’ve never been to “rock bottom.”  I’ve never had any element of my life totally ruined by alcohol or drugs like many, many people have.  I’ve been “functional” with emphasis on “fun.”  But when I look in the mirror now, I clearly see that if the writing’s going to come, the alcohol has to go.  I can also see I need to drop 50 lbs.

The scales are falling from my eyes, even if the numbers on the scale aren’t dropping as fast.  Consider:  For the first time in over 30 years I can look in the mirror and say “I haven’t had a drink in 10 days.” I can’t make any promises that I’ll never drink again.  I don’t need a recovery group to tell me that one day at a time is a reality, or that a journey of a thousand words starts with a single keystroke.  But the lying to myself stops now.