I voted Tuesday, February 15, 2016, in the first Wisconsin election since Photo ID was required.  I used this drivers license: 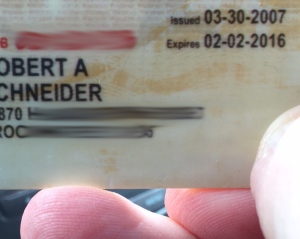 I was allowed to vote with an expired credential.   I am the face of Democratic vote fraud Scott Walker wanted so badly to exist, when he started pushing voter ID requirements. (Note: I discovered the expiration after I voted, and could not pull my ballot out of the machine. No illegal intent.)  I only report the fact.  I will leave it to others to speculate on how I got away with this.  Familiarity with the poll worker? Maybe the inconsequential nature of the single-office primary ballot for a judge-ship?  Who knows?  But I do vote in the heart of Waukesha County, dubbed “Most Republican” in the entire U.S.

When I discovered the expiration I had to laugh at how the system had failed.  I had put one over on Darth Walker.  Then I remembered I had to fly on Friday!   TSA could keep me off of my flight, causing the loss of all of my non-refundable vacation deposits!

My initial angst eased as I remembered I have a recently renewed passport card.  I stuck that in my wallet.  But I still had to renew my license, so I went to the DMV Friday morning, only to see further evidence that ID laws are designed (at least in WIsconsin) to be burdensome.

I checked the DMV website for requirements the night before. After hunting through many pages I eventually feel confident that I had enough ID (between my old Driver’s license and Passport) to renew.

8:15 a.m.:  Enter the Golf Road DMV station to hear the computer systems are down. I’m shunted to a chair, assured I will be called. No numbers or any form of sequence are given to me or anyone else being herded into the waiting pen.

“I’d like to renew my Driver’s License.” I said.

“Did you bring your birth certificate,  or some kind of other “Real ID” like a Passport?”

Saved by my actions a day earlier I provide the Passport card.

“…and your Social Security Card?”

Thank goodness I carry my original laminated 1980 Social Security Card out of habit.  The agent finishes my vision test, marks a few boxes on my application indicating I have shown 3 forms of Identification, and pushes the papers back to me.

“Did you have your picture taken,” the civil servant asks, peevishly?

“Uh… No.  I went to that desk and they told me to sit down until I was called to your desk.  No picture was mentioned.”

“Well, you have to have your picture taken before we can go farther.”  “Go stand in that line.” I do.

8:40 a.m. Picture taken, I return to stand behind “Sandy,” who is now diligently doling customers out to open service windows. Sandy sends me up again, to a different agent.  I hand her my expired license, and my completely filled out “Application For Drivers License Renewal” and she says, “How can I help you?”

Okay…chill.  She’s being nice. “I’d like to finish my license renewal process.” She struggles with her computer a bit, can’t find my photo, asks me to present all three forms of ID again, scans the old License andpunches it VOID, then walks away with my passport to do some form of federal verification.

“Hey man, how ya doin…I need to have my plates renewed. They were stolen,” he tells the very meek, downtrodden looking man at the next service window. Let’s call him Bartleby Meekman.

“Okay, can I see your driver’s license?”

“No sir,but I got this,” the dude says as he hands over an application form.  The scribner, who appears he would prefer being anywhere else right now, looks at the form, then up at the dude.

“I might if I could even read your name.”

“Do you remember the stolen plate numbers, at least?”

“Man I TOLD you they were stolen! How am I supposed to know that?”

So Bartleby rises to consult a manager, as I rattle off the previous six license plate numbers of my wife’s and my cars, in my head. I looked to see if my passport card was coming back, and made sure my SSN card was still in view, with my credit card and expired license.  As my agent returned, relieved that my Federal Passport card was authentic, Bartleby came back with a fresh set of license plates for the Dude.

“What’s your Social Security number,” he askes, and the Dude rattles off a few numbers before handing cash to Meekman.  The Dude thanks him and bops out the door.  Meanwhile, my agent asks for further re-re-clarification of something for which she holds three answers in her hands.

I turn to Meekman, after checking that the Dude was out of earshot, and ask, “Am I missing something?  He was able to do that entire transaction without producing a single form of ID, payed cash and walks out of here in les than 5 minutes?”

“Well, I did get his Social Security number,” Meekman says.

9:00 a.m. I walk out of the DMV with my paper temporary license, which I am told is good until my “Real ID” (“With a star on it, so it’s better!”) arrives from the outsourced, privatized printing firm that handles that work for the State.  I think to myself, “Acquiring this license/ID card required me to have a day off, three forms of ID (one of which cost me $135 to procure).  This card, or one like it is REQUIRED to vote in this state. What do people who don’t have paid days off, passports, college degrees, or internet access to prepare in advance do to get these things?”

Even then, the “requirement” for an I.D.is selectively enforced, as in my voting with an expired license, or the Dude’s license plate replacement mission being completed without any ID at all!  That is when it strikes me: you can’t vote wih a license plate, so getting them is easy!

I am sure the voter ID requirements will be enforced on some people.  But the people implementing that law already know that polling place enforcement is a rarely required, last line of defense.  The sheer pain of getting the ID to vote in the first place is a sufficient deterrent for many.  The whole scene reeks of sham systems erected for the appearance of regulation and compliance, only to be enforced at the whim of a low level functionary or, in the worst case scenario, by a politically motivated, snarling pack of vote suppressors.

I truly cannot wait to pass through TSA security for my flight today.  Should I mess with them and see if they’ll accept my paper temp license, or my expired license?  Nah… I’ll conform so that an overzealous enforcer doesn’t decide it’s his day to make me miss my flight.

Who am I kidding.  That’ll never happen.  I’m white.