Ga Ga is political, and we’ll take anything we can get…. but a political point does not leave the targeted wondering whether or not they just saw something political.

Great for Trump fan-boys, but for me the game evoked PTSD flashbacks of election night. But I’m not here to talk sports.  I’m here for politics.

Halftime.  Halftime is where the real controversy rages.  Did you see Lady Gaga’s incredibly bold political statement?  No? Me neither.  Oh, sure, she sang a single verse of Woody Guthrie’s “This Land is Your Land” after singing a verse of “God Bless America”… that song the very reason Guthrie wrote “TLIYL” as a protest against fascist, nationalist  theocrats.   To what effect?  A reminder that the “GBA” folks have to realize the “TLIYL” folks are still here?  Maybe, but singing a catchy ditty has all the effect of Bruce Springsteen singing his dystopic, America-indicting anthem, “Born In The U.S.A.” to rednecks.  The point is subtle at best, missed by most, and co-opted and abused at worst.

“Oh… but what about Gaga singing “Born This Way”?” you ask.   She sang

Don’t be a drag, just be a queen
Whether you’re broke or evergreen
You’re black, white, beige, chola descent
You’re Lebanese, you’re Orient
Whether life’s disabilities
Left you outcast, bullied, or teased
Rejoice and love yourself today
‘Cause baby you were born this way
No matter gay, straight, or bi
Lesbian, transgender life
I’m on the right track baby
I was born to survive

OK… slightly touchier, but there was no shock or surprise. It was no Janet Jackson nipple-gate, or Britney/Madonna tonsil hockey.    Yes, we got to say, “Take that, Trump!  We struck a note of inclusivity on national TV, as you are running roughshod over the marginalized, oppressed, and foreign.”  But…she didn’t even SAY any of that.

Gaga sang.  Her hits. Fantastically well, I might add… this WAS one of the best halftime shows ever — what a spectacle!  But I’m not here to do a broadway review.  I’m here for politics.

In the end, singing “Born This Way,” Gaga sang one of her hits. Period.

A political point does not leave the targeted wondering whether or not they just saw something political.  When the right-wing is saying, “Wow, I’m surprised she didn’t get all political” and many of my “liberal” friends are outraged that national media is not reporting how subversive Gaga was, it might reveal Gaga was too-subtle by half, politically.

I concede two points immediately:
1.  The Super Bowl half-time is no doubt on “delay” so that any overt politicization could be quashed.
2. All acts are political, and criticizing is easy.  In our testy environment opinions on the relative merit of political statements are like assholes:  Everyone’s got one and the other guy’s stinks.   It’s the sign of our times, and I’m guilty of luxuriating in that lazy zeitgeist myself.
But I sha’n’t let self-awareness keep me from my appointed rounds!

These liberal calls for the media to acknowledge Gaga’s political master-stroke left me feeling much as I had as I marched in the Women’s March in Madison, WI, January 21, 2017. I kept hearing the call “Show me what Democracy looks like” and response “This is what democracy looks like,”  and thought … “No… this is what an amazing street protest looks like.  This Democracy word you keep using. I do not think it means what you think it means.”

It seems we need a reminder of what a “political statement” looks like.

charged Super Bowl half-time looks like a full-on-fro’ed dance troupe dressed as Black Panthers, forming an “X” to the tune of Beyonce’s “Formation” in protest of police brutality; in support of “Black Lives Matter.” 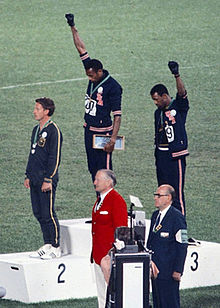 A political statement looks like John Carlos and Tommy Smith raising a black-power fist from the top of the Olympic Medal Podium… or even the more subtle fact that the white, Australian Silver Medalist is wearing a pin — joining Carlos/Smith’s cause — and that act ruined his career thereafter.

Marlon Brando sending a Native American to refuse the Best Actor Oscar for his performance in The Godfather,  allowing Sacheen Littlefeather to instead deliver a withering indictment of the treatment of Native Americans… that’s a political act.

Singing one of your hits on the American Music Awards, and inserting the chant “No Trump/No KKK/No Fascist USA” in the bridge instrumental, as Green Day did on live national TV… that’s a political statement. 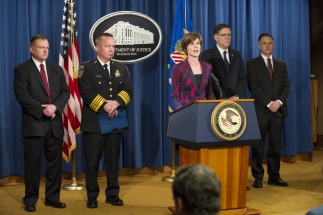 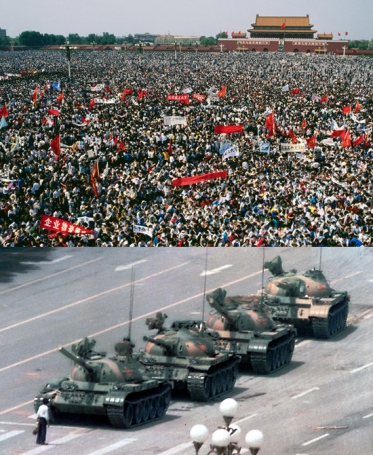 Like protesting in Tiananmen Square, in 1989… when you know the tanks are lining up; or standing in front of the tanks, after they’ve started laying down the smack — when you know your government is in the middle of killing over 2000 of your fellow protesters.

As much as I’m hectoring others to do more, I’m trying to stir up courage in myself. I know… I know… we have to stop “eating our own.” We have to accept whatever each of us is willing to bring to the table. Lady Gaga is political, and I’m with her.  We’ll take anything we can get, say “Thank you!” and keep plugging forward.  I do gratefully accept any activism that anyone is willing to contribute toward this cause: pushing back against the Trump administration and this Republican Congress … continuing to strive toward our “more perfect union.”

But we need more.  We need risk.  Especially from those who already have power or a platform and not only can reach a wider audience, but can afford the risk because… unlike a Syrian refugee, or a lone gay man in Wyoming, they are safe.

“This is no time for back slapping, This is no time for marching bands…”  Lou Reed sang in 1989, as the Berlin Wall fell, as Tiananmen unfolded.  No time for half-measures and veiled symbolism. Singing a pre-recorded “God Bless America,” in front of an array of Intel drones swirling in the sky to form an American flag, is about as effective a political statement as… as… Senator Chuck Schumer registering a strong note of opposition to Neal Gorsuch’s nomination to the SCOTUS, right before voting for him.