The very power of creation is in the labeling.

If I get nothing more from leaving Facebook for 40 days than this realization that I need to watch my mouth, it will be a major victory.

The 9th in a series of blog entries, whilst abstaining from Facebook.  Just say no.

Of productivity, prime remainders, caviling, and labeling. Strap in for some Jazz.

I told my son I had a particularly productive day the other day, and he looked at me and asked, “Did you make any money at it?”  Damn kids.  He also caught me logged onto Facebook, and began laughing maniacally, snap-chatting to the world “He didn’t even make it 10 days! What a hypocrite!” Damn absolutist kids.  No room for nuance.

I received a notice that someone had accepted my friend request in FB.  Can’t be. I haven’t made any friend requests, and definitely not to this person.  Assuming a hack, I logged in, changed my password and got out.  But in the mind of an 18 year old seeking differentiation from his father, this incident is just another data point in the compendium of failings proving he doesn’t have to listen to me. 🙂   Stages.

Fast Progress:
Alright!  I’m almost 25% through my planned forty days abstaining from Facebook.  9 days down, 31 to go.  Whew.  31 looks huge.  A prime remainder.  That reminds me of the time a friend said, “You never struck me as a product of divorce.”  Well… I’m not, I’m the sum of all my experiences, a fraction of which involve my parent’s divorce, and I’m just a remainder of that failed equation.

Labels:
What would happen if I walked around identifying myself as “a product of divorce?”  “Yeah, my parent’s divorce says everything worth knowing about me. What does divorce imply to you?  Really? Great, mold me in that image in your mind forever-more.”

In transit to a writing critique group, I heard a snippet of public radio last night, in which a teacher advocated we drop all labels related to reading.

“Kids aren’t “delayed readers” or “advanced readers” or “reluctant readers”. At the end of the day, if they have a book in their lap they’re readers and we want more of them.”  Reading is fluid, she said.

“Just like gender,” my mouthy inner monologue chimed in.  “Why define anything.  Everything is everything, in a cosmic singularity, and no one is to judge, define or discriminate in any sense of the word — even to distinguish up from down, black from white, 20 grams from 25 grams.  All reduced to being able to say nothing more judgmental, or prescriptive, than Dr. Phil’s “How’s that workin’ out for you?”

Then I entered my writing group, and one of the members recounted how his son committed suicide.  “I can track the day it all started back to when he was 8 years old and he was labeled “learning disabled.”  It wasn’t long after that he started drawing pictures and talking about dying.” The son allowed another’s label to define and limit him, and he could not see or imagine a way around the label.  It prevented. 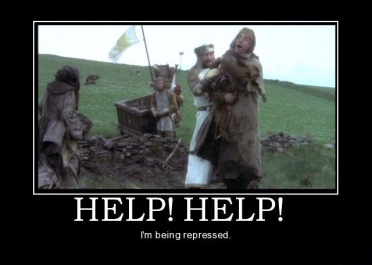 The trouble with labels (definitions, standards, protocols) is that on one side they can be true and useful, and on the other they are limiting, prescriptive and represent (in the voice of my favorite complaining Monty Python peasant) “the violence inherent in the system.”

Labels can identify and define, or they can be used to manipulate a response from someone who is already tuned to care about a given label.  Cultivated Buttons ™,  I call them.  Plant’em early, keep’em alive with repeated use and nurturing, call’em up when you need to get results, mount an army, defeat a foe, divide and conquer.

In the beginning was the word.  And it labeled something.

And it came to pass, the LABELER could no longer distinguish alternatives or allow change — for the word is true and will always be so — falling deeper and deeper into confirmation bias, that the words already spoken were unalterable, inflexible.  Verily, he the began protecting the words as sacred.

Finding a way to use the power of accurate labeling (differentation, distinguishing differences that matter), without succumbing to the violence of imposing labels permanently, or falling into Stockholm Syndrome — identifying with your captor, passively accepting someone else’s label; swallowing whole another’s opinion of what your label means (even if it is a label you willingly self identify as) — is a key to … Happiness. Or something.

The very power of creation is in the labeling.

If I get nothing more from leaving Facebook for 40 days than this realization that I need to watch my mouth, it will be a major victory.

“What a pleasure it is to see you again!  You look great.  Love your top.”

Tomorrow:  On the failure of abstinence only approaches.