Many of you may be saying, “Rob, you aren’t Nevada born, nor have you lived there since you were 18 (and a part of 19) years old? Why the sentimental allegiance?”

The answer is that the shit we stuff into our heads between age 3 and 18 is called “formative” for a reason.

Nevada’s mountains and sky are etched into my brain forever. My blood pressure drops 20 points every time I see them, and breath the crystal clear air.  I can taste the sulfurous dirt where we dug cave-forts into hillsides.  I can smell the sagebrush after a rainstorm, and practically feel the piñon pine pitch gumming-up my keyboard as I type. I carry in my deepest heart the silence and isolation of the Steptoe Valley, where no sound but that of the world filled most space; where no time passed unmarked in the rings of 4,000 year old Bristlecones.

I can feel my butt pucker, as I recall scrambling around, and over, an open 800’ deep abandoned mine shaft, or tentatively probe a half-mile into a collapsed mining tunnel with no light other than a cheap 1970’s era plastic flashlight.  I revel in a time and a place where capacious public lands meant the only restrictions on my movement were my physical limits, and the absolute demand that we be home in time for dinner.

Every time I ride my bicycle, the wind whipping by my ears puts me back atop Mt. Wheeler, buffeted by winds chasing up the Eastern slope out of Spring Valley. Every burbling brook recalls the icy, trout-filled eddies of Timber Creek. 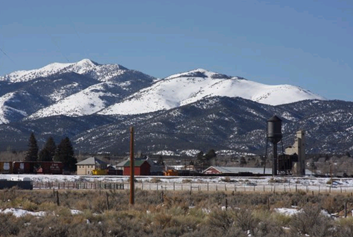 Nature made it great.  The fact that it was the only life I knew made it permanent.

I hold dear the lessons of my first job delivering newspapers — to attorneys and prostitutes alike.  Yes, I had to solicit the madame at The Big Four for the $4.25 monthly subscription fee.  My dishwashing, grease-monkeying, bread delivering, and golf-course watering taught me how desperately I needed to go to college.

Nostalgia is a tricky beast, however. Romanticizing a lost time or place, without reflecting on the less salubrious aspects, is a hollow sham. Avoiding nostalgia altogether is self-mutilation; willful amputation.

My blood is in Nevada. From the half of my face scraped off in an Evel Knievel emulation gone bad on Ely Street; to what flowed from face and arms and stomach, nearly stomped to death on High Street, (I called a new kid a “dick” for moving a microscope slide in freshman biology) before a neighbor willing to intervene chased my attackers away; to the profuse explosion of my ear-lobe, crushed like a ripe grape in the collision of two heads chasing down one errant basketball.

I broke bones there.  A nose (see Knievel stunt).  A leg, under the weight of an ungraceful 300 pound wrestling coach. I peeled myself off the gym floor, after a former Oakland Raider-cum-football coach tried to teach me that sometimes in life you have to be ready to fight — even on a basketball court… in a faculty scrimmage… against a 35 year old ex-professional linebacker.

My first memories of “love” live there:  at a childhood dance where a girl actually WANTED to dance with me more than once!  At a prom where my date asked me to drop her off at her boyfriend’s house midway through the night.  (In those lights, it seems less inexplicable how I might have been groomed for the Catholic priesthood, my initial point of departure at 18.)

It’s all there in Nevada.  The good, the bad, the pathetic, the glorious, the happy, and the ugly.

She is “Battle Born” this Halloween day, 1864, dragged in to support the Union in the Civil War, now unironically supportive of the Trump Confederacy, everywhere but in the cities.

And for better or worse, in ways I can’t explain or erase, “Home Means Nevada To Me.”