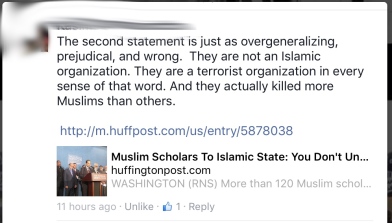 So the conversation continues, and thankfully so far reasonably.  I posted ““Drawing Conclusions”” on my Facebook page, and excerpted the essence of it on another friends page in response to the Klan meme.  I received the reply to the right almost immediately.

As we all know,  discussing terrorism and Islam and Muslims, and the intersection of that Venn Diagram is quite touchy business, and while I don’t express my thoughts perfectly, I do try to be honest and clear.  I am not a rabid “Muslim Hater.” or Islamophobe, as I’ve been labeled instantly by two people who, I dare say, don’t consider it possible to discuss Islam without throwing that label onto others.  I responded to my new Facebook interlocutor:

It blows my mind:  saying “ISIS is Islamic” in origin or nature is not the same as saying “All Muslims are ISIS.”  It’s the same magicky rhetorical maneuver that turns “You know, we might consider doing something to deter police brutality against innocent citizens,” into “You hate all cops!!!”  I don’t.  I hate injustice. I hate a self appointed “judge, jury and executioner.”

You see, there is no central Islamic Authority to franchise out McMosques, and authoritatively  declare which are official representatives of Headquarters.   This de-centralization means anyone who claims to be Islamic is simply establishing a sect, and if they base their actions on a verbatim reading of the Koran, or their interpretation of it, they’re Islamic.

But non ISIS Muslims don’t want to be lumped in with them.   By the magic of saying “God is all Good!” it empowers anyone who wishes to do so to say, in the wake of horror, “That’s not MY Church.  Those people aren’t “True” <insert fanatical wackaloon sect here>!”    When indoctrinated with the idea of God or Allah’s “omnibenevolence,” it becomes easy to avoid considering, “Hey… the ideas I labor under might actually be causing the wackaloons to think they’re doing a good thing.”

The exchange continued, and I found through subtle coding that my debate partner is Muslim, or really, really being PC by issuing a “PBUH.”

So… some islamic scholars say ISIS isn’t Islamic. OK.  Some Baptists say Catholics aren’t Christian, and the Papacy is “The Whore of Babylon.”  But they both operate from a text, which informs their central ideology.  They both call themselves Christian, and the text  enables their fringe members to justify untold horrors.  It just happens that the Christians grew weary of the bloodbath after the Inquisition, Reformation, 100 Years War, and other demonstrations that people of one flavor of God will kill others of the same flavor for the most arcane doctrinal disagreements.

Can I say it again?  I’m not making a point that one book is better than the other.  I’m not saying “ISIS Represents all Muslims.”   I am making the point that we lie to ourselves in a very destructive way when we try to say Religion, and religious indoctrination, isn’t sourcing the violence.

Finally, I almost spit coffee out my nose reading the last paragraph from the Facebook poster.  Really?  I don’t know what terror it is to worry that some religiously emboldened wack job is going to come through a door and take me out some day because of what I represent?   Have you not been watching all the innocent people slaughtered in public venues by religiously motivated murderers?

On this point we may actually share common ground:  We both fear unexpected attacks.