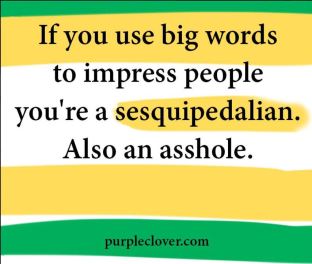 A friend sent me this meme: “If you use big words to impress people, you’re a sesquipedalian.  Also an Asshole.”

I do declare, it appears some fraction of my cohort takes umbrage with my linguistic facility?

I’ve been hearing this all my life; at least from the day a particularly pugnacious classmate told me to stop using big words in 5th grade. “Nobody talks like that!”

I did.  Rather, I do. We didn’t have a word for it back then, and even if we did I’d probably be shamed for using it.  No one tells Usain Bolt (not that I would compare myself to Usain Bolt) to stop running fast, because he’s making the slow kids feel bad. On the other hand, if Usain constantly challenged dinner party guests to 100 yard dashes, he might be considered an asshole.  I suppose Usain walks with people, when necessary; does not flaunt or abuse his speed.

What am I saying? Am I suddenly conciliatory? Am I agreeing that there’s an appropriate time and place for large words?  It appears so, but I don’t mean to. First of all I don’t use large words to impress people.  I use them to connote very precise meaning, shades of nuance and subtlety.  I own or have acquired the 64 color box of Crayons. I’m not going to confine myself to drawing verbal pictures with 8.  Sure, sometimes there is no value in crying “peach,” when “pink” would suffice. (Or using “suffice” when “do” would do.) But goddamnit, sometimes the sky is lapis-lazuli, and other times azure or cerulean!  The demand by the inept that we abjure our life’s lexicon smacks of Dunning/Kruger syndrome. (Look it up.  It’ll do you good.)

This meme is one man’s attempt to Harrison Bergeron me!  (Do you have to look that up, too? I suppose I’ll be shunned for knowing (and using) literary references? Look it up, read the story.  It might expand your mind.) This meme is one man’s demand that he not be discomfited by the exertion of learning; that all encounters he has should fall within his pre-existing knowledge, and that fairness exists only if I’m dragged down to his level.  “I don’t WANT to expand my brain!”  It is the societal clamour (I know, I didn’t need to use the British “u” spelling, to make myself both pompous AND effete) “Who do you think you are? You think you’re better than us?”

Indubitably.  And that’s not bad, or wrong.  It’s a fact of life as certain as the fact that I can’t run as fast as Usain Bolt, can’t see as well as some people, and would not stand a chance against Conor McGregor in a fistfight.  Celebrate our strengths.

I don’t shame Usain for being a faster runner than I, and I’m too damn old to apologize for using the verbal skills that somehow lodged in my genetic makeup.

I admit, and I am aware, some people use their verbal skills as bludgeons…er… like baseball bats: intentionally attempting to assert power because they are more articulate or well versed, or exposed to the “correct” cultural interpretation that signifies membership in the academy of expertise, the in-crowd that is “better.” That use of intelligence is as abusive as if McGregor were to walk into a board meeting and punch everyone who said he wasn’t company president.

But experts are expert. The gifted ARE gifted.  Thus it’s equally bad when any of us feel tiny and — instead of stretching to grow — we demand the rest of the world pander and accommodate us at our level.

As a culture, we have got to find a way to stop acceding to the demands of the “Dunning/Kruger” afflicted, who insist we dumb down — that we abandon expertise or ignore it just because they don’t have it and they feel less than — as we simultaneously figure out how to lift each other up with our unique strengths, to make the world better for everyone.