Letter to a friend, upon Oscar Nominations.

I’m sorry Oscar Nominations seem to you an “anti-indicator” of a movie’s quality.

Yes, I don’t expect my movie recommendations to carry much weight with you.  Political readings/inclinations aside, you remain the person who thought Princess Bride was the worst movie ever. I wear the badge of “anti-critic” with pride in your case.

Parasite is akin in quality, clarity, craft, economy, beauty, and enigma to 1975’s best picture, Chinatown.  It won 6 Oscars, but then – Chinatown was in English and there were only 12 films released that year.

Have you seen Chinatown? Thoughts on it might give weight or direction on Parasite, though I should say the story and themes are NOT similar at all.  No “My Mother, My sister” crap in Parasite. (Oh, dear! Did I spoil Chinatown?  45 years later.) I refuse to spoil Parasite… unless you read my 7 blog entries on it. It’s pretty much flayed, autopsied, assayed, magnified, mounted on pins, and on display at a museum in those pieces.

There are spoilers for EVERY other nominated movie below, so like Tim the Enchanter in the Holy Grail  “I warned ye!” 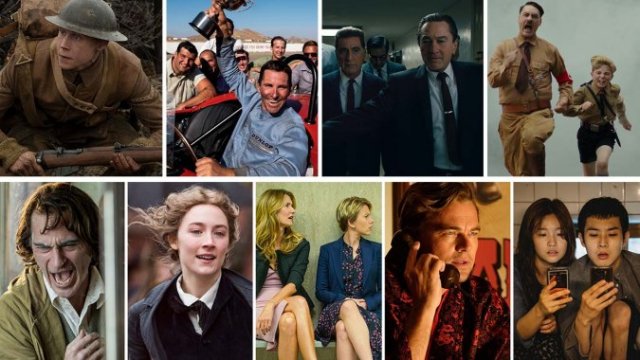 Best Picture 2020 Nominees: 1917, Ford vs Ferrari, The Irishman, Jojo Rabbit, The Joker, Little Women, Marriage Story, Once Upon a Time in Hollywood, and Parasite.

I’ve seen most of the nominated movies this year. We’re going to see “Little Women” tonight.  My thoughts on Best Picture Nominees I’ve seen?  Why, thank you for asking!

Joker – visually, photographically brilliant. Edits to die for.  And the stairs scene? I was giddy.  Overall… left me cold, compared to Dark Knight.  Don’t give me that “unreliable narrator” crap to try to salvage 2.5 hours of meanderings, bad writing, and wooden Rupert Pupkin reprise for DeNiro preceding the reveal. Sorry… spoiler.

Jojo Rabbit – Not to be a spoiler (but you won’t see it anyway) the story of a gentle, 9 year old German momma’s boy, with a munitions-caused, disfiguring eye injury, and a penchant for hallucinating his imaginary friend (Adolph Hitler) to help him through the tough times, struck a little too close to home. (Read the memoir.  Coming to bookstores as soon as I get a publisher!)

Actually, JoJo’s a fun movie, with Waititi’s other worldly sensibilities ( I mean c’mon, man… he’s a Kiwi! That’s practically alien to an American eye!).  There are some top-shelf clever performances from the kiddos, in a heartwarming look at how we can be taught to treat others as vermin, or get sucked along on the tsunami of the times into doing things we might otherwise at least claim we resist? And if we are sucked in? Go out with a flourish!

Once Upon A Time In Hollywood –  I love me some Tarantino, and while this movie was an absolute jewel-box recreation of 1970’s Hollywood, it feels masturbatory and ends up being another one of his “altered-ending” fantasies on historical events.  You know – like Inglorious Basterds, where the secret Jewish super-force from America firebombs the entire Nazi command structure in a Paris theater? Or, when the black slave comes back as vigilante enforcer in Django Unchained?  At least this time Tarantino didn’t use a movie as his “get out of jail free” card to drop 248 N words.   DiCaprio deserves best actor.  Overall? Good, but not worthy of the hype.   Yes… an alternative ending to the Manson Murders.  There… spoiled that one, too.

1917 – A world war one movie made great/different by a camera technique and “real-time” linear story telling structure with minimal shots?  Pass.  Didn’t see it.  Don’t need further reminders of WWI. Can’t we aim for some new mythologies, hagiographies and panegyrics, rather than rehashing WWI? FFS.  YMMV!  I mean seriously! I would pay good money to see Taka Waititi put a spin on WWI.  We need to see our myths through the eyes of others!

The Lighthouse – HA!  Trick question.  This one wasn’t nominated for Best Picture, in spite of what I hear are epic performances by Willem DaFoe and Robert (“Yes, sorry about Twilight”) Pattinson. Black and white, 4×3 aspect-ratio, art-house bait.  I will see it, but have not yet.  I will make myself understand and like it!!

The Irishman – Another Scorcese/DeNiro mob movie? Say it isn’t so, Joe… Pesci, who is also in this plodder. I watched the first 45 minutes (thank God it streams for free on Netflix) and had to check three different times if I was comatose. I will return to complete it however, because I’m experienced enough a movie goer to know sometimes you have to suffer a slow open.  What if I had given up on The Deer Hunter in the first hour? I would hate myself! In what I saw, however, the attempt to “age-correct” Robert De Niro for the flashback scenes are horrendous. Can’t be done.  You can age a 35 year old to play 70, it’s tough to back-age a rickety (well earned, mind you… no slight on DeNiro) old man’s body to look like it is doing things a 35 year old Mafioso might be called on to do.

Marriage Story:  Have not seen it.  I am almost as constitutionally allergic to Adam Driver as I am to car movies. I hear it is incredibly well done, emotionally wrenching.  A story about divorce.  My wife saw it and took notes…  Should I worry? (I’m joking. She doesn’t take notes during movies.  She researches every actor’s back story and IMDB history, at least when we’re at home.   It’s like living in “Pop-Up Video” – a cultural reference you will no doubt miss.)

That’s all for this time.  Do tell me how you fill your time, as I’m filling mine with movie reviews, blog posts, snark and Trump avoidance.